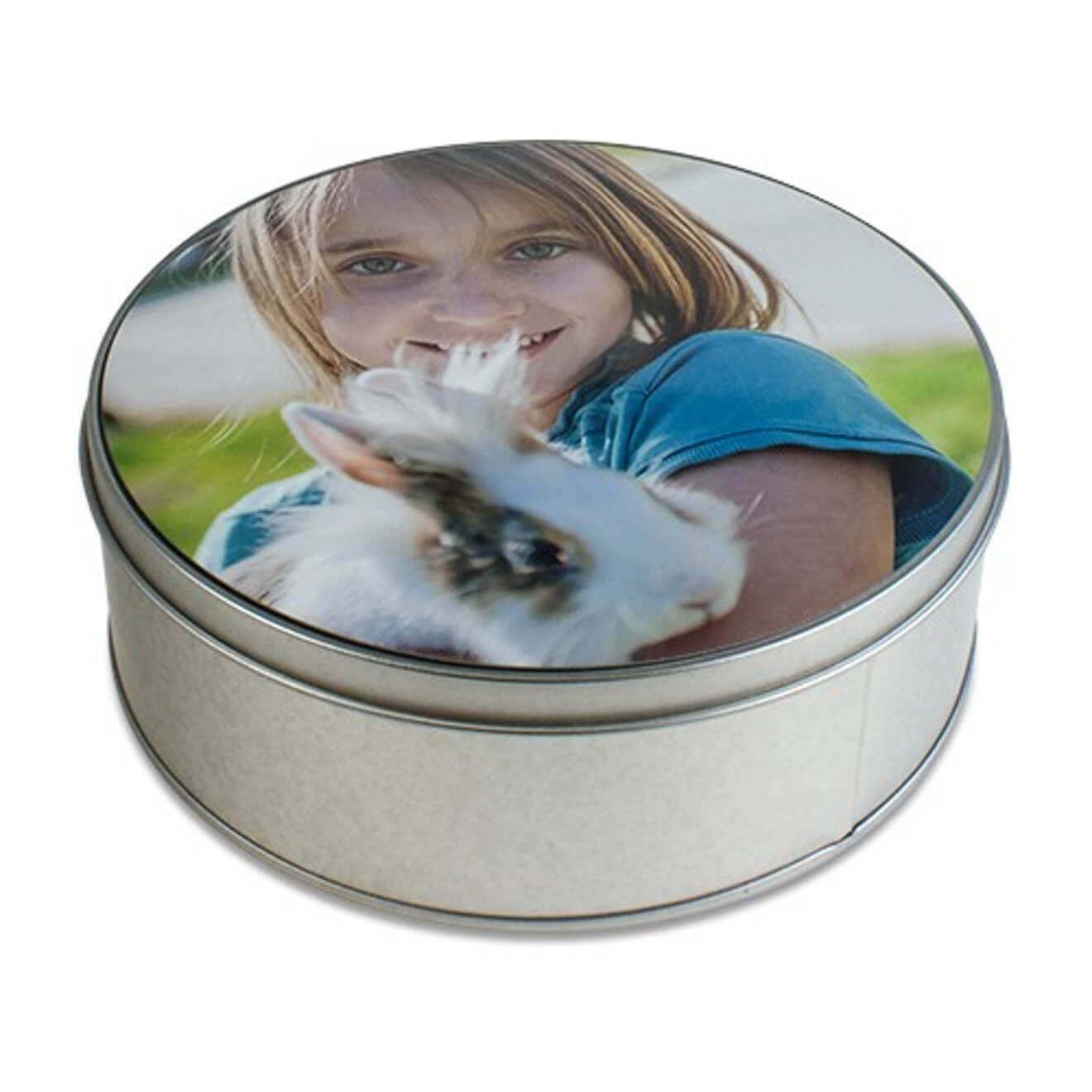 Who has never used a storage metal box ? I’m sure that in every citizen’s cupboard there are tin boxes. And who knows how many tins there are in his studio, flat, house or even castle? I don’t think many people have made an account of every single tin. There are tins of all kinds and for all purposes: for storing old souvenirs, photos, key rings etc., metal tins for storing biscuits, metal sweet tins, pill tins, tins for a thousand and one uses for storing a thousand and one things…

These tins are usually decorated with either a logo or an image and serve as marketing advertisements for companies. Moreover, they come in different shapes and sizes; square, rectangular, round. But how many people know the origin?

b) Food and liquid preservation

Since prehistoric times, humans have been aware that it is very difficult to preserve food over the long term and, above all, to keep it fresh in the best conditions. So the prehistoric hunter had to gorge himself on meat, because as everyone knows, meat can only be preserved for a very short time and it was sometimes difficult to eat all the products of the hunt. But after noticing that their food spoiled quickly when it was in liquid (blood, juice, etc.), they decided to dry and salt their fish and meat and to dry the fruits (grapes, dates, etc.). Many groups have developed artisanal techniques to improve food preservation.

The discovery and development of ceramics was a major step forward in the preservation and storage of certain liquids, such as wine and various drinks obtained after distillation or fermentation and therefore containing alcohol. This made it possible to preserve liquids in hermetically sealed ceramic containers. These tightly sealed containers were indispensable for their preservation.

Another preservation solution that humans used several thousand years before Christ was cold or freeze-drying. Freeze-drying means freezing the food and then dehydrating it to remove the liquid.

Each era has brought advances in food and liquid preservation.

The Romans introduced brine and vinegar as a preservative, resulting in marinade. Then came sodium chloride and acetic acid, which were mankind’s first preservative food additives. After that, benzoic and sorbic acids, natural preservatives present in certain spices, cinnamon and cloves, helped Marco Polo’s travels.

In the Middle Ages, tobacco was added, also a preservative additive, but also the formaldehyde found in wood smoke, which allowed the smoking of many foods.

According to Wikipedia: “The invention of tinplate dates back to the 13th century and is attributed to Bohemian and Saxon metallurgists. The secret of its manufacture was long and carefully kept. At Colbert’s request, this material was imported into France by German technicians. The first tinplate factory in France was founded in 1665 in Beaumont-la-Ferrière in the Nièvre. Others were established in Franche-Comté, Alsace and Normandy. However, they soon collapsed under the competition from the English and Welsh, who were masters in the art of tinplate manufacture. Tinplate production remained the prerogative of Great Britain, which supplied the entire French demand until the last years of the 19th century.

“Tin was originally produced sheet by sheet, by dipping in molten tin after careful pickling. The modern process of tinning is done by electrolysis on a steel strip that runs at high speed. This tinning strip serves as the cathode, the anode is made up of pure tin bars, which supply the electrolyte with Sn2+ ions. The electrolyte consists of 4-hydroxy benzene sulphonic acid (HO-C6H4-SO3H) and various adducts. The thickness of the deposited tin depends on the aggressiveness of the intended contents (e.g. the acidity of sauerkraut is more demanding than powdered baby formula). This “sandwich” alloy of steel and tin has good hardness and guarantees high corrosion resistance. It is a non-toxic alloy, which is why it is used extensively in food packaging.

in the United Kingdom, metal cans were adopted to contain the tobacco sniffed by the richest Englishmen. It can be estimated that these were the first containers, packaging of the modern era to preserve products.

Industrial manufacturing began in England (in South Wales) in the early 18th century, the main contributions being the mechanical rolling (reducing the thickness) of steel and its pickling. This technique spread to Europe and America. The techniques have been improved over the years and up to the present day, leading to different compositions such as aluminium, copper, etc.

Step by step many problems were solved and food packaging technologies were mastered, which led to many advances.

It can therefore be said that several objectives have been achieved:

“Workers or craftsmen making household or gardening utensils in galvanised steel, a profession that has practically disappeared, are also called tinsmiths (Tinsmiths are those who make or sell tools or utensils made of tin, often for household use, such as saucepans, basins, plates and lanterns. The term is also used to describe the workers and craftsmen who install and shape roofing structures in galvanised steel or another metal (zinc, copper, etc.). This term is used more in Switzerland and in certain French regions such as Savoie or Alsace.

Metal boxes first appeared in the early 18th century. It was thanks to industrialisation that the marketing of iron cans in large quantities was able to develop. Previously, the containers were made of cloth, cardboard or wood.

Stamping is a technique for manufacturing and modifying objects from a flat, thin sheet of metal (a piece of metal obtained by rolling) whose shape cannot be developed from a mould (e.g. a one-piece car body).

The raw material that has not yet been stamped is called Becker. Stamping is a technique widely used in the household appliances industry.

Stamping is a technique of “plastic” deformation of the material: elongation or local constriction of the sheet to obtain the desired shape.

In the 1900s, households were already recycling long before today’s self-righteous sustainability. These tins found new uses when they were empty. A biscuit or candy tin became a sugar tin to put on the table, or a pill tin. These white metal tins made it easier to preserve food because they were protected from the sun and light, which was a much better way of preserving food than in cardboard or wooden tins, which could be attacked by rats, mice or other bugs in the cupboards of housewives. Between 1950 and 1980, the market for plastic tins developed, particularly with one of the best-known brands, Tupperware, which produced tins for all sorts of uses and which in certain circumstances are more suitable than white metal tins: in the fridge, in the freezer, in the microwave oven, etc. Metal tins are less used, but are often more attractive and decorative than plastic tins. Like many people, we have kept metal tins and in particular the metal tin of one of the first mobile phones, the Nokia 3310, etc. A box decorated by the operator who sold it!

Some people collect metal boxes made of iron and tin, this is called boxoferrophilia. There are also museums in Belgium : the lithographed box museum in Grand-Hallet, in Hannut between Brussels and Liège.

Mrs Yvette Dardenne, a buxidaferrophile (collector of metal boxes), has 60,000 metal boxes in her collection, but this lady started her collection 30 years ago… You can call her to visit her extraordinary museum of metal cans, by appointment! A museum that offers a journey through time and memories. You will find most types of metal tins; metal tins for toys, toffees, cocoa, coffee, etc.

This museum houses an impressive heritage of history, a fabulous treasure for the models, subjects, various and varied formats and for the use to which our forefathers had intended these white metal tins from the 19th century to today.

The owner of these treasures is often begged for exhibitions in the four corners of the earth. 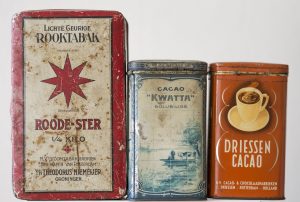 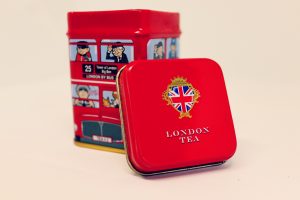 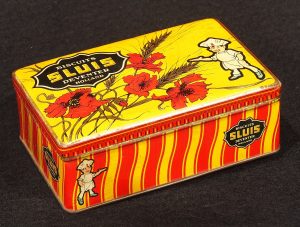 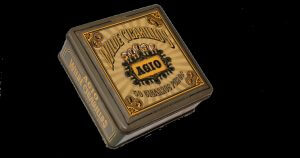 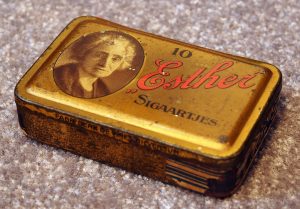 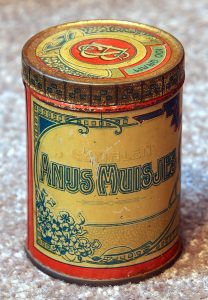 Museum of the metal box