a) Jewellery in a bank safe ?

The object we offer is made of faux leather in a rectangular shape to escape the standardisation of jewellery boxes, “Made in China”. You have the possibility to find decorations for almost every imaginable event: Mother’s Day, Valentine’s Day, birthdays, and of course we can apply your photo on the lid of this jewellery box. Just choose the jewellery box with the desired decoration on Gifts-custopolis.com.

Any jewel, brilliant, necklace, brooch, ring, diamond, pearl and any jewel, prestigious or not, deserve a lot of care, delicacy, precaution

Of course, we could put our treasures in a safe deposit box at the bank, but then we would not be able to enjoy them every day nor contemplate them when we want to. So a case, a box, are in my opinion the best solutions, to receive and preserve these various ornaments, moreover these containers are dedicated to this function. It would be a real pity and not very rewarding to store these “precious” items, as Gollum said in the Lord of the Rings, in anything: like a simple cardboard box, a woollen stocking, or even a plastic bag. Jewellery boxes come in many different shapes and materials: solid gold, gilded bronze or glass, and these containers can also have many different shapes. According to the prestigious Drouot house, some jewellery boxes date back to the time of the priests of ancient Egypt who would have fashioned them in order to collect cult objects.

b)  Perfectly safe from moisture

Others see in them the mark of the Templars or the Freemasons who used these containers to conceal compasses, mallets, small trowels, crosses and cords. “In any case, the existence of jewellery boxes is clearly attested as early as ancient Rome where, in families, the woman was the custodian of the particular seal of the house which served to seal the cases containing the precious objects. Indeed, as a Ladies’ Manual from 1833 reminds us, precious stones and gold jewellery must be perfectly protected from humidity and preserved from any dirty or greasy contact: “It is advisable to rub them from time to time with a piece of white or chamois leather” and then place them in the “jewellery box”. In French, the word “écrin”, synonymous with “boîte à bijoux” (jewellery box), is originally derived from the Latin word “crines”, meaning “hair”, and was used to preserve souvenirs made of hair. Later on, the use of Jewellery boxes was extended to include all the useful and necessary accessories for the embellishment of the head: earrings, necklaces and combs. Nowadays we add bracelets, chains, rings, etc. “ 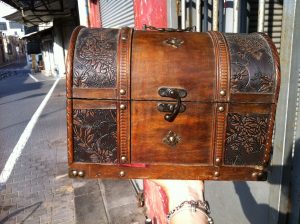 In the West, one of the best-known ancestors of the jewellery box is the shrine, a stone, wooden or metal coffin in which the remains of a dead person are enclosed. Is it really necessary to dissociate its uses, whether sacred or profane, when we know to what extent emeralds, diamonds, rubies and other sapphires are still today the object of a fascination that sometimes borders on devotion?

“At the turn of the 13th and 14th centuries, their sizes diminished, allowing them to be covered with precious materials, whether fabric, enamel or stones. Visually, all these boxes lost their coffin-like appearance and took on the shape of small monuments evoking chapels or churches. Also at this time, cast iron was combined with pushed, stamped or embossed metal. The jewellery box then became less aristocratic.

The privilege of the aristocrats at the beginning and for hundreds of years, the popularisation of jewellery boxes did not begin until the beginning of the 19th century following the industrialisation of many manufacturing processes which became factories and of course production lines. Thus, more modest families could afford jewellery boxes to preserve jewellery and other precious items passed down from parents, grandparents, great-grandparents or any other family member in a more permanent way.

However, some objects inherited from a distant and not always shameful past are frowned upon today, such as ivory jewellery. It should also be pointed out that there are simple jewellery boxes without compartments and other jewellery boxes with many compartments, of course the prices vary greatly. There are also musical jewellery boxes. Today we find music boxes at all prices, music boxes that have become gadgets that many people know. Music boxes were the only instrument that allowed you to listen to a melody if you were not a musician! The music box had its heyday in the early 19th century. 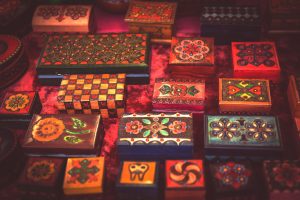 From simple wood covered with velvet, very popular with the Americans, to the gilded bronze and lacquered marquetry highly appreciated under Napoleon III, via esoteric versions in zinc and tortoiseshell, so many avenues were explored! Under the Second Empire, for example, the size of these cases was reduced, while at the same time they were extravagantly decorated with gold leaf and ivory. In comparison, American jewellery boxes of the late 19th century appear more austere, and Victorian English boxes are often larger and more padded inside. Decorated with straight-edged geometric designs, they may have only a simple engraved cartouche as a touch of folly. Another key period for jewellery boxes, at the dawn of women’s emancipation, was Art Nouveau and its “whip” shapes.

Made of regula, copper, gold or even silver, the boxes of these years are often decorated with silk or satin. Because of their delicate workmanship and fragile materials, the boxes in their original state are almost impossible to find. There were, however, many of them, after they became popular at the turn of the 1900s. But in the months following 1918, they simply disappeared from manufacturers’ catalogues, to be replaced by boxes made of imitation ivory and celluloid, the famous ivory that the English call “French Ivory”. The limitation of materials and the changes in codes brought about by the art deco movement resulted in an extreme simplification of the ornamentation. Lack of imagination or generalised paranoia, the jewellery boxes of the 20th century seem to have been supplanted by bank vaults. There is no need to take so many precautions, because the most daring will tell you that no secret is inviolable… *

Not everyone wants to celebrate a birthday. But this jewellery box decorated with the birthday label, birthday gifts to personalise, birthday gifts, which you choose and thanks to your nice message, the most reluctant will change their mind for this unusual birthday gift idea